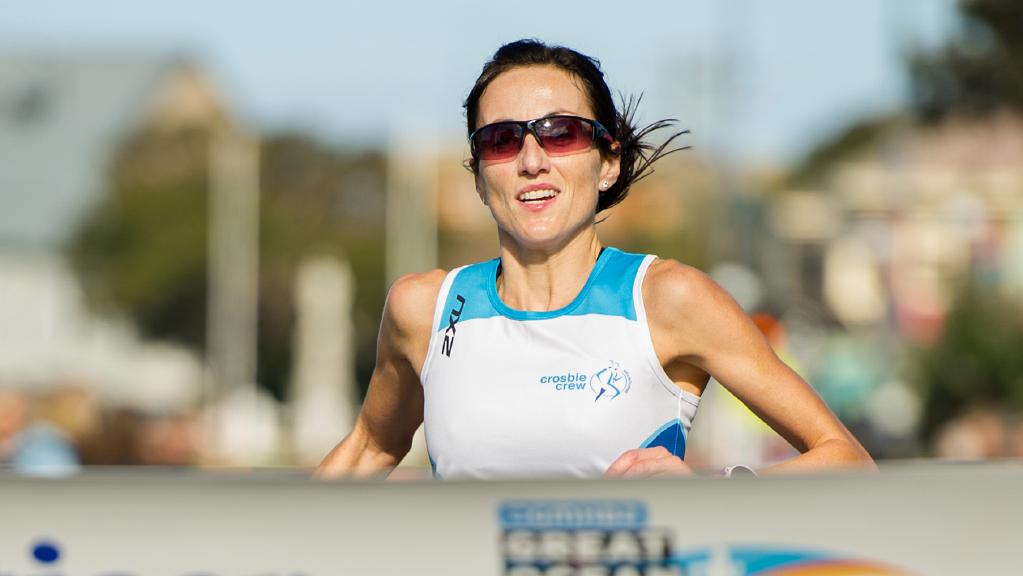 SINEAD Diver will be hoping this weekend’s Great Ocean Road Running Festival will provide her with two reasons to celebrate.

The 40-year-old mum of two will contest the Geelong Advertiser 14km Paradise Run on Saturday – her first major run back since her breakthrough 2:31.37 marathon in Nagoya.

And the Irish-born Aussie is on tenterhooks waiting for an imminent announcement to confirm that she will represent Australia at the world championships in London in August.

“She is always worried about those type of things,” said her coach Tim Crosbie. “But I’m confident the selectors will pick her, although given the London race is less than three months away, you have to wonder what the delay is.”

This weekend however Diver will have a chance to test her form compared to 2015 when she had a great battle with Tarli Bird before winning the 14km event in a race record time of 46min14sec. That run in 2015 came just before her impressive debut for Australia at the world championships in Beijing.

“She had a few niggly injury things in 2016, but she’s been pretty much injury- free for nine months now and had six months of solid preparation before Nagoya,” Crosbie said.

“People talk about the age thing, but in her case she’s not like a normal 40-year-old runner as she only took up running about six years ago. It’s more that she has matured as an athlete and now is all about consistency with her training.”

The feature race this weekend is again the marathon along the 44km stretch of iconic Great Ocean Road from Lorne to Apollo Bay.

Geelong’s Julian Spence is favourite to win his third successive title and claim the $3000 purse.

Spence, who owns and runs The Running Company store in Ballarat, is expected to have some early opposition from John Dutton and Jason Dalton.

The big surprise in the women’s event is that three-time champion Kirstin Bull who used the event as a springboard to her world 100km road title, has opted to just run the 14km on Saturday with a few friends.

That leaves Dubbo’s Jane Fardell as the nominal favourite from last year’s third placegetter Anne Marie Carolan and Lucie Hardiman as a nominal favourite, although with a number of internationals among the sold out field it is hard to predict a winner.

Tash Fraser who won last year’s inaugural 60km ultra will be back to defend her title and could even lead the women’s marathon early before her first turnoff to Wongarra. Fraser set a new race record for the Two Bays course this year.

Numbers are way up in the 23km half marathon, which starts at Kennett River and heads to Apollo Bay.

Former Olympian and distance superstar Craig Mottram is also entered and despite being in semi-retirement is still capable of running fast times. while even at 54, Steve Moneghetti can be expected to finish high up.

Moloney, an Elwood primary teacher,  won the half last year and has remained loyal to the race after growing up on a dairy farm in nearby Garvoc.

Torquay’s Ellie Pashley, who recently got married (nee O’Kane), will be her main danger.

As with the marathon, entries in the half are well up on last year with well over 3,000 entrants so far.

The weather forecast for both days is cool in the morning with an overnight lows of around 12C and a chance of a shower before reaching a top of 19 degrees.

The Great Ocean Road Running Festival has a distance for everyone.

On Saturday afternoon there’s the Great Ocean Road Real Estate 1.5km Kids Gallop at 10.30am followed by a community Mizuno 6km Run at 11.30am as well at the Geelong Advertiser 14km Paradise Run at 1pm. All Saturday events start at the Apollo Bay Hotel and you can register on the day.

For those who prefer a slower pace, participants can also opt for 5km, 10km or 15km Walk along the Great Ocean Road on Sunday.