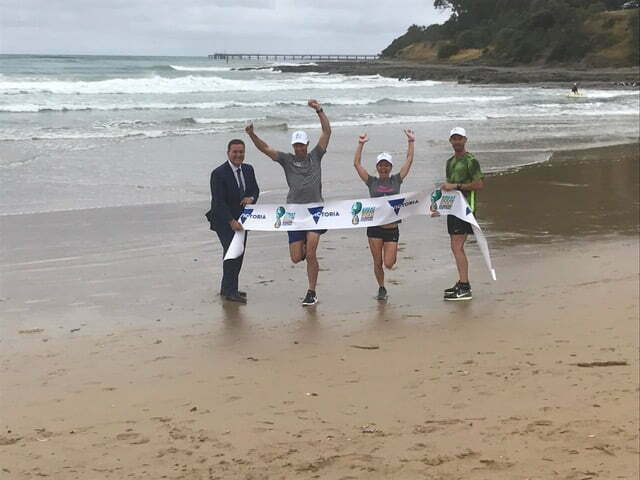 We are pleased to announce that the Great Ocean Road Running Festival has joined forces with Visit Victoria to promote one of the world’s most stunning running events to a global audience. The partnership enables this iconic regional event to be invigorated with a range of new activities and a national and international marketing campaign for the newly-named and branded Great Ocean Road Running Festival on the 20th and 21st May, 2017.

Minister for Tourism and Major Events, John Eren said the two day festival of running across Lorne and Apollo Bay will attract people from all over the world.

“There’s no destination for a running event quite as picturesque as the Great Ocean Road. This is a rare opportunity to run one of the world’s most stunning courses.

“Runners from all over the state will join visitors from around Australia and the world to tackle the grueling circuit. That’s a big boost to local businesses and the economy,” Minister Eren said.

In addition to the six running distances on offer, 2017’s event will see the introduction of a scenic walk along the Great Ocean Road as well as Festival Hubs at the Lorne Hotel and Lorne Theatre, as part of the soon to be launched Lorne Passport enabling visitors to explore more of the seaside town.

“The partnership with Visit Victoria will bring great opportunities for the event and the region in both the short and long term.

“Commencing at the 2017 event, we have plans to enhance the experience for our participants and their friends and family through the initiation of Festival Hubs for music, film and wellness.

“The Lorne Passport will be a ticket to all such activities as well as new walking events in Lorne, including one on the Great Ocean Road itself – one of the partnership objectives is to increase the economic impact of the event for the region and the communities along the Great Ocean Road,” Mr Gale said.

“We are excited to partner with such a great event and one that is so important for the area. The initiatives to increase the impact on Lorne and the introduction of the Festival Hubs will be a huge attraction for the participants and all of their guests over the weekend. We are looking forward to confirming the line-up of the acts over the weekend with more announcements to follow soon,” said Paul Upham, GM Lorne Hotel.

Official Film Festival Hub Lorne Theatre will add to the suite of activities on offer over the event weekend.

“The Lorne Theatre is pleased to partner with the Great Ocean Road Running Festival. Part of our involvement as one of the Festival Hubs will be to provide free entry to those that participate in the Lorne Passport to view some quality filmed entertainment, which will be confirmed a little closer to the event. We also hope to provide some thought provoking guest speakers as well. We look forward to being able to showcase our town in what is traditionally a quieter period, however no less beautiful than the summer months” said Tony Hill, Lorne Theatre.

“It is terrific to be a part of an event that keeps evolving. Last year we saw the introduction of the 60km ultra marathon and with the support of Visit Victoria, 2017 will feature scenic walks in Lorne.

“The Great Ocean Road Running Festival remains for me one of the most stunning running events in the world, and I encourage people of all ages and abilities to choose from one of the seven events on offer so they too can experience this scenic coastline without traffic,” Mr. Moneghetti said.

As well as the range of new festival activities available through the Lorne Passport, people of all ages and fitness levels can participate in one of the six returning events on offer across a range of distances from the 1.5km Kids’ Gallop to the 60km Ultra Marathon.

Early bird entry to the Great Ocean Road Running Festival is now open. People are encouraged to enter now and conquer one of the most stunning and unique marathons in the world.

By using the Great Ocean Road Running Festival website, you agree that we can place cookies on your device as described in our Cookie PolicyOk Thanks