What an incredible 10-day virtual experience! After having to constantly keep up with 2020 and the challenges that it has faced us all with, we finally were able to come together over August 21-30 for another Great Ocean Road Virtual Running Festival. It has been an absolute pleasure joining and adapting with all 962 of you on your own unique virtual journeys.

We have loved seeing all the different ways in which everyone has taken on the #YouRunYourWay challenge. All the amazing stories from around Australia and the globe have been so inspiring, and we are delighted to share with you some of our favourite highlights.

Whether it be competing in triathlons, running ultra-marathons or climbing mountains, Thomas Dade is always seeking a new adventure. He has run 10 Ultra Marathons since September 2019, climbed 4/7 of the summits and is on a constant epic journey of self discovery and pushing limits. With so many races cancelled, he decided to create his own personal challenge to conquer all six of the Virtual Running Festival events within a week, that’s 148.5km – “I wanted to set myself a challenge that I thought was within my current limits but at the same time scared me”.

Thomas is no stranger to being faced with difficulties within his endeavors, and the Virtual Run Fest posed some of its own. He was met him with a familiar, unwelcomed friend: pain. Thomas knew he was still able to run if he took it easy but confessed that “this hurt the ego a little bit. I had to remind myself of the bigger picture, [which was] completing the distances and not the running as fast as I could”.

“I think the biggest thing with overcoming challenges though is to just relax and go with the flow and remember the reason it’s an achievement is because of the challenges. Having that perspective is key”.

Follow Thomas on his past, present and future adventures here.

Jai introduced Tracey and Natalie to the world of neuroblastoma. Tracey was Jai’s teacher, and Natalie’s sons went to school with him.

Jai was diagnosed with neuroblastoma at 4 1/2 years old. Neuroblastoma is a cancer that mainly affects children, the average age of diagnosis is just 2 years old.  Aggressive forms of the cancer only have a 50% survival rate and treatments are lengthy, toxic and often have lasting side effects.

He unfortunately lost his battle at 9 years old on the 5th March 2015.  Since then Tracey and Natalie have been on a mission to raise awareness for this horrible childhood cancer.  Last year the two decided to run their first marathon to raise money and awareness to Neuroblastoma.

“Jai’s favorite player was Corey Enright from Geelong, number 44 and so the Great Ocean Road had to be our first marathon.  We wanted to run 44kms for 44 children whose lives had been impacted with a diagnosis of neuroblastoma”.

Tracey decided that Friday 28th August was her date and set out at 6am.  Once she started she was always going to get the 44 km done. Natalie wasn’t quite ready to complete her 44km in one go, but plans to do it on September 13th in 4hrs and 44mins.

“It was a perfect sunny spring morning along the picturesque Adelaide coast.  Not the Great Ocean Road, but a good COVID substitute.  It was emotional thinking and talking about each of the children along the way and what they have had to endure.  Some are currently in treatment, there are stories of hope with the survivors, but many who have been taken too soon.  Our heart breaks for those families, their children will be forever in our hearts and never forgotten.”

You can read the children’s stories here.

Alison has been lucky enough to have called Lorne her home for nearly 5 years. After completing the Great Ocean Road Running Festival’s 23km Half Marathon for the last 4 years, she was determined to take on the 44km Full Marathon in 2020. Living locally, Alison was able to run her virtual course from Lorne to Apollo Bay!

Alison’s virtual experience:
“I completed the 44km journey on Saturday the 22nd of August. It was freezing cold, it rained, it was windy and even had hail. Everyone had warned me it was going to be bad and I should postpone. I know it was not the best conditions, but I had that date in my mind and couldn’t change it! I really enjoyed it (apart from the hail!) I was lucky enough to have the help of two friends handing me water and snakes along the way which was just amazing!”

“I can’t wait to get that medal and hang it up along with my other medals. I want to thank the great ocean road run fest for holding the virtual event, I hope we can have the real event next year, not only for the participants but for the regional towns who benefit so much from these amazing events.” 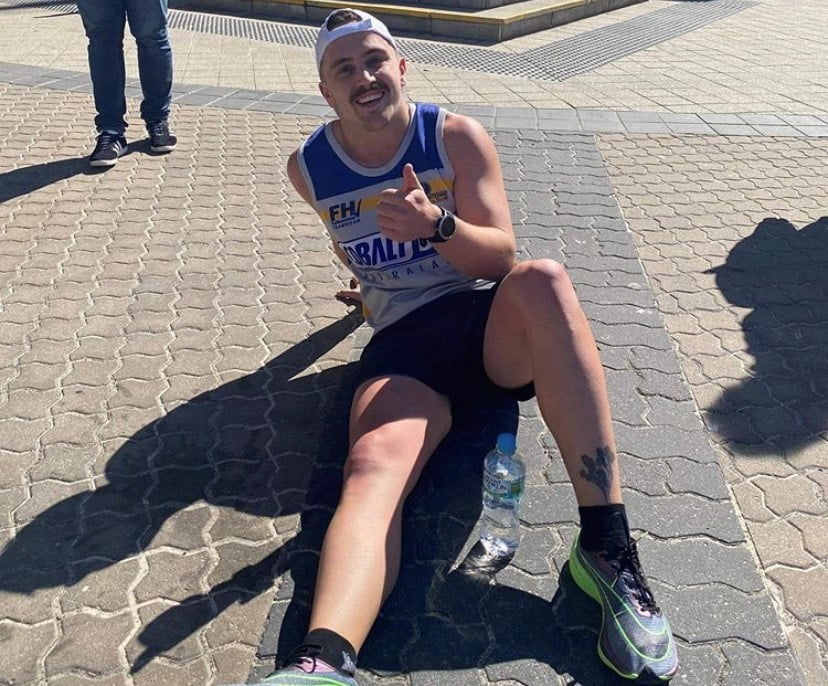 The idea stemmed from some of his last moments with Josh. During his time in hospital, they got onto the topic of Bucket Lists. A number of things came to Josh’s mind, but none more so than wanting to drive his beloved car along the Great Ocean Road. Luke knew “if I jumped in his car and said I was going to drive it, he would be looking down shaking his head at me, so I figured I would combine one of his bucket list items with one of mine; running a marathon”.

For his full story, and to support Luke and his marathon fundraiser, click here.

Shiral had originally set out to complete the 14km Virtual Event, but instead ended up running every day over the 10 day Virtual Run Fest, conquering a total of 77km.

“My motivation at first was simple… due to the 1hr outdoor exercise limitation, I was going to run 14KM over the 2-3 day event weekend and get a medal. Then, when it was announced that we had 10 days to complete any event we wanted, I set my sights on the elusive full marathon. I figured I only had to run a minimum of 4.5KM every day and that seemed achievable. Now, I’ve never run consecutive days before, but I know someone who has run 5KM every day for 455 days… and all I had to do was 10 days.”

What started off as a 4.5KM run on day 1 ended up being 7.5KM (well within the 1 hr limit), giving him the motivation to maintain this as an average for the next 9 days. Melbourne’s wild weather definitely added its extra challenges, giving Shiral a number of excuses to quit; from high winds, rain, hail and even a thunderstorm or two. Throughout this though, he just kept reminding himself that all he needed to do was find a 30-45 minute window to meet his 10 day marathon goal.

“On day 2, I left for my run when the weather was clear and 10 minutes in, in true Melbourne fashion, the skies opened up and it started pouring down… but even that wasn’t going to stop me. Reflecting back, the last 3KM on day 10 were the hardest. Running into 36-45km/hr wind meant that I literally ran with my head down and eyes closed. I could have stopped at 6KM on the day, but I knew I would be letting myself down and pushed through to 8KM… And this is how I ended up with 77KM when all I wanted to do was 14KM”.

“At the end of the day, there’s no better reward for my motivation than knowing that my GOR runs have inspired a few of my friends to reignite their passion for running or to take it up as a hobby in 2020.”

Thank-you so much to all those that joined us over the 10 days. Everyone experienced their Great Ocean Road VIRTUAL Running Festival in such different and personal ways, and we are once again beyond proud to have been part of it. We look forward to seeing everyone on The Road in 2021.