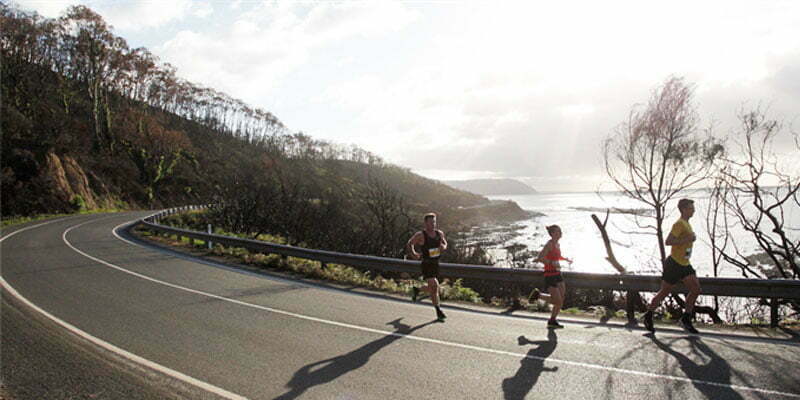 The most stunning sunrise set the scene for defending champion Julian Spence, who endured late morning rain and a headwind to win the 44 km GMHBA Great Ocean Road Marathon in 2:33:00.

Spence broke away early from the strong field, finishing with a convincing win, nine minutes ahead of Ash Watson from Ballarat who was followed by Darren Moyle from NSW in third place.

“There were a lot of good runners behind me and I went out hard from the gun and it really hurt me late, especially with that wind,” Spence said.

“All things considered I was happy with the time. You really have to adjust your plans and expectations when you get conditions like this. So yes, I’m content. I’m happy.

“You can’t miss this one. Just sit there at Lorne as the sun comes up and you know why you come back.”

Victoria’s iconic Great Ocean Road proved a safe haven for Kirstin Bull who took out a hat-trick in the Women’s Marathon with a convincing win inspired by the support of locals along her 3:06:37 run.

“I love the fact we are running through all these little towns like Wye River, Kennett River and Skenes Creek and there’s all these local people out cheering for you, it’s just amazing,” Bull said.

“I went out trying to break 3 hours for the course today but I got to 23 km, then it all went backwards after that as there was the most hideous headwind so I am absolutely wrapped to come away with a third win today.

“It was definitely tough. It was the hardest of the three that I have run,” added Bull.

The 12th edition of the GMHBA Great Ocean Road Marathon included the introduction of the 60km ultra marathon which was taken out by Francesco Ciancio in 4:05:02 and in the women’s, Natasha Fraser won in 4:33:01 with thousands of locals cheering them across the Apollo Bay finish line.

The 23km half marathon from Kennett River to Apollo Bay attracted over 3,000 participants, the largest field of the six distances on offer. In the women’s Virginia Moloney toppled last year’s winner Ellie O’Kane in 1:23:50 with Charlotte Wilson, third.

Ben Ashkettle won the men’s half marathon in 1:13:42, with Brady Threlfall second and Stephen Dinneen a sound third after taking out the title in 2015.

The GMHBA Great Ocean Road Marathon festival also featured two athletes bound for the Rio Olympics. Marathon runner Liam Adams used the 14km distance as a training run and still won in 41:24 and Chris Erikson the 50km walker participated in the half marathon as part of his Olympic preparations.